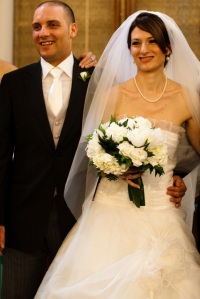 Thursday, June 10 at 4:00p.m. Giovanni and Francesca were married. Paul and I served as witnesses for Giovanni, and it was such an honor, blessing, and privilege to be a part of such a wonderful day. Paul was able to pray over them and present them with a bible. He did a very good job, especially since he had no idea he was going to do it prior to arriving at the church.

The ceremony was a true worshipful event. We sang some great songs and I thought Giovanni was going to start dancing down the aisle at one point. We were all praying that those there who were not believers would hear something that would bring them closer to the Truth. 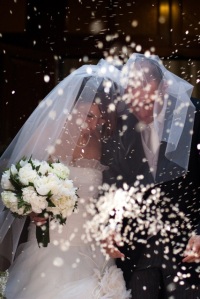 Giovanni’s friend, Marko, gave us a ride to the church and reception. He and Paul had some in depth conversations about the ceremony and traditions and what evangelicals believe. Paul also talked with Francesca’s cousin, Alfredo, and the photographer, Enzo, about Christ and what we believe.

And now for the reception. It was held at a beautiful restaurant and was al fresco. We started on a patio with tables and tables of antipasto. Afterwards we moved into the dining area, which was still al fresco. Usually at weddings here you are served seafood and we were but since I cannot eat seafood at the moment I ate the carne menu. Here’s a rundown of what we had: 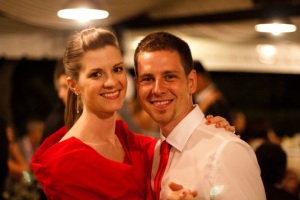 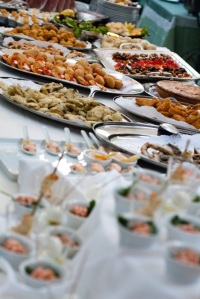 wedding cake and other pastries and desserts

The food was AMAZING!

There was an artist doing caricatures, which was so funny to watch. Everyone got one done, including Paul, Lily, and I. There were also three musicians playing old Neopolitan songs. At the end of the night they sang a song called “Americano” to us. Several of our friends joined in. It was at this moment I felt that I was in some kind of Italian movie, maybe at Carla’s wedding in “The Godfather”. It was the most Italian thing I have been a part of to date. It was really awesome.

We ended up arriving home around 1:30 a.m. Where was Lily during all of this, you ask? S 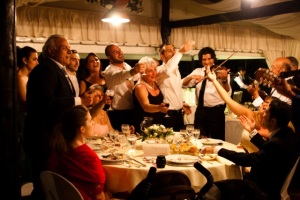 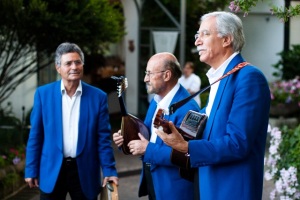 One thought on “THE Wedding.”