Heroes are everywhere these days. They storm the box offices every other month defeating villains and saving the world. They come alive in books as they fight goblins, slay dragons, and rescue princesses.They are in our cities and communities, saving people’s lives, teaching our children, fighting injustices and going to war.

Who are your heroes?

My heroes come in the form of two little bodies that I brought into this world with the help of powerful drugs and good doctors. The last year has brought countless transitions to our family and Gingernut and Lil’ Paul have faced them head-on, with questions and sometimes sadness but also with courage.

When we told them we were moving to Italy they asked “Why?”. Our answer was and is because Italians don’t know the grace and love of Jesus and someone has to tell them.They caught that vision and began communicating it to others during the process of us moving. It was incredible to hear them explain to people the “why”. The “why” is something we talk about even now on the hard days when they miss their friends and family in America.

They did all this with questions and some sadness but with little hearts that tried very hard to understand that our love for God trumps all other loves and when He says “Go”, you go.

Gingernut and Lil’ Paul live in a context in which they don’t completely fit in and when we go back to the States for a visit they won’t fit in their either. But that’s a whole ‘nother post.

They cannot communicate well at this point, which means school, playing, making friends, and just every day things are difficult. They now go to school and try so hard to do their best with very, very limited language, and while in six months or a year they will be functioning in Italian far better than I, in this moment, life is a struggle because of the lack of language. However, they try. They try their absolute best to speak and learn and understand. They do it with perseverance and strength and a
courage I do not possess. They do it with little or no complaint (with the exception of Lil’ Paul crying ALL THE WAY TO SCHOOL that he doesn’t want to go. Any advice with this problem would be appreciated.) They make friends easier than I do with
less language than I possess. I am amazed on a daily basis at their abilities and extravertedness. They just get out their and do it. I admire them so much for it.

They have hard days. Days where they miss their friends or ask to call a grandparent or cousin. It might be days before a phone call actually happens because of the time difference. Days when they miss their old cat, Remus. Days when they want to go back to our other house (meaning our house in Winston-Salem). But they keep going. They fight even though they don’t know they are doing it. 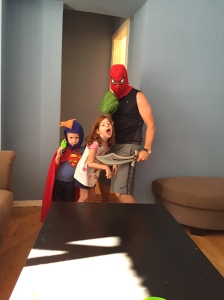